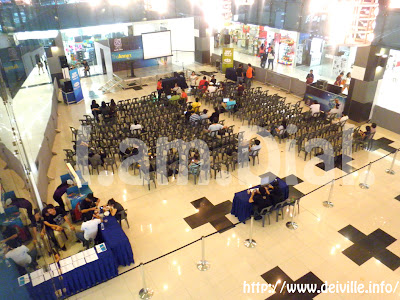 Blogger Fiesta was not just about Google’s Blogger or Blogspot [before] even though the event is in celebration with the platform Blogger. Among any other things, the blogging community becomes increasingly active and an organized gatherings such as this creates a camaraderie among bloggers themselves and at the same time learning is a continuos process. Every now and then a blogger’s perspectives and objectives gets shabby, rustic, or worst decayed.
I came in at around 11:15 on my clock and sat beside Jenny Manongdo [mannaforjenny.tumblr], most bloggers came in very late. Old faces came in late and newer ones were inset and determine what’s ahead with the blogosphere. I started blogging barely a year ago, but I have been active online since, say 12 years ago? 🙂
To kick-start the event, Azrael Coladilla – the man behind Azrael’s Merryland, Blogger Fest, event organizer, etc. played along some video clips related to latest gadgets, webby to ponder on, blogging tips and tricks.
Azrael Coladilla‘s topic basically tackles a blogging 101 for newbies or for those who wanted to start a blog per se. Google has applied a lot of improvement and updates on its Blogger features. Making it the most user-friendly platform today. Although most WordPress users I know, recommend it because of its powerful tools and features.  By now, I’m thinking of studying WordPress and perhaps shift one of my site to achieve a diverse blogging experience 🙂
Juned Sunido discussed the previous DTI’s noisy display of interest against online promotion. To date, DTI has temporarily released an approved guidelines effective only until November 2011. Ongoing discussions is under scrutiny, lets just hope DTI will remain open-minded and fair to everyone.
My take on Jhong Medina‘s presentation, oh boy using WordPress must have been too technical to handle [for now] there’s too many structured pieces to engineer proficiency, oh boy I’m too lazy 🙂 My blogs being in Google, could gain enough traffic at the right phase, little by little I tried to register it to some so called SEO but the thing is its too engaging unless I develop a serious sensibility to  earn online [which to some were the justification of their blogging careers]. But for the mean time, the blogs travel along, visit it or not, will stay for while until I decide its path.
Bob Reyes‘ story about the Bob Reyes of the Philippines vs. Bob Reyes of the United States was gratifying, he possessed a virtual property able to sustain the site for such a long time and then here comes this dominating guy from the U.S. persuading him to sell the domain name to him and eventually after offering him a value cost of $10,000 he cast-off by saying he only have $9,000, what a moron! 🙂
Jonel Uy and David de Angelo takes on  the blogging genre and style. Jonel  talks about the 4C’s  of blogging: Character, Content, Context and Creator. He must have an eerie disposition with the alphabets: 4B’s transfigured into 4C’s. 🙂
He presented the blogging branding with concise and a blend of Jonel Uy’s systematic lecture.
While David de Angelo “aka” Steve Austin rocks the house with his brawny entrance, indeed he exhibited a taste of what a blogger’s character, persona and psyche should impose. In laymen’s term, differentiate your blogs disposition depending on the market niche. If your into political-related topics, then  set out your fearless views and opinions for the the public, in case its youth oriented – take consideration the current craze and fad, animated, graphic, fascinating, the blog should not appear boring and if you intend to  blog about entertainment and/or lifestyle – deliberately show your fondness to tittle-tattle, scandals, buzz and whispers. 🙂
One of the speakers I eagerly awaits was Carlo Ople‘s. If you have attended iBlog7 last April in U.P., his talks about “The Ten Power Blogging Tips” has now multiplied that he added ” 6 More Power Blogging Tips [related to social media]”.  His presentation is validated by up-to-date figures and data, and shares his theories about social media generously. Soon he may possibly released a self-published narratives or books perhaps entitled “The 100 Power Blogging Tips” provided he will do by chance a mandatory 8 to 9 more speaking engagements. 🙂
I was surprised and excited when I saw Jenny Manongdo‘s name on the list of guest speakers. Being a journalist, she did an amazing job conveying her thoughts! Journalist/s as I see it, were like a walking dictionary without narrative definition but are armed with so many viewpoint.
Her subject being the joi de vivre and perks of blogging, focuses on being the blogger persona as the future communicator, being proud as a blogger, carry on with the blogs as a hobby so as not to get pressured on some other blogging issues. Just like the brand-strategy guy Mr. Uy 🙂  Jenny was able to jive with the crowd by giving away small tokens who participated to her discussion. 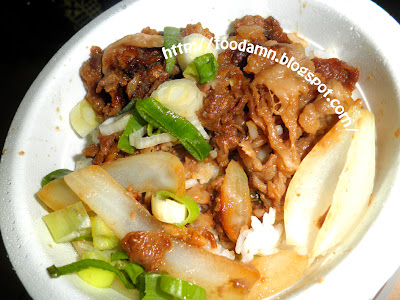 Even though there’s no foodie to rave about 🙂 I got myself a beefy meal from one of the guest speaker and blogger friend Jenny Manongdo. Good thing she was a semi-vegetarian and fortunate I was there and was a 3/4 vegetarian. The beef rice toppings comes with a separate sauce and lemonade. While the Fruitas Ice Candy stand was there, I can’t seem to afford one because of my bad sore throat. At the end of every speaker’s discussion, they hold a raffle giveaway, they say my name came out for a Thunderbird shirt shortly after I left the area for some bathroom breaks and Jollibee treats. 🙂 And it was forfeited but its okay I was aiming foolishly for the main prize and guess who won one of the major prize, Jenny Manongdo, the substance of joy and rewards of blogging proves its point at that very moment. Congrats Jenny!
Thanks Azrael for putting up this event, more power Manila Bloggers!
Total Page Visits: 1802 - Today Page Visits: 0
Categories: Blogging CommunitySocial MediaSocial Media Philippines
Tags: blogger eventBlogger Fiesta Manilabloggersbloggingblogging summitblogspotCyberzonegoogleManila BloggersSM

Co-founder of Echo Manila trio, website and content creator from Manila, Philippines. She is ardent in taking challenging projects that will help small and medium businesses bridge relationship gaps by providing in-depth content strategy, thoughtful design with actionable advice on business development, digital incubation, growth hacking, among other things. (When she’s not spending Saturdays with manga/anime discussions, feeding her wiener dog, mini pins and African lovebirds.) Follow her on Twitter via @greendei

DeiVille gets featured on Lumina Homes

#DEIVILLEGiveaway and #PURPLEPLUMFAIRYGiveaway Treats You with a September Birthday Giveaway! Let’s start the –ber months with #DEIVILLEGiveaway and #PURPLEPLUMFAIRYGiveaway – A September Birthday Giveaway! DEIVILLE Giveaway started back in 2013, our way to express gratitude to Read more…